Joseph (Joe) Denis Skinner was born in Chesterfield, MO, on May 13, 1998. In 2002 the family moved from Missouri to Florida just before Joe’s 4th birthday.  By that fall, Joe began playing sports, baseball and soccer, to be exact. Joe was happiest on a baseball diamond, practicing his skills. This love of sports never went away, but in fact, grew stronger and more varied. Joe branched out and began playing basketball, a season of football and started swimming. He found ways to excel, set goals and to challenge himself on land and in the water.

Joe was bitten by the sports bug but baseball was his passion.

In addition to Little League, Joe joined a travel baseball team at the age of 7 while continuing with recreation league basketball, soccer and swimming when time allowed.  In middle school at St. Mary Magdalen in Altamonte Springs, Joe was able to participate in school basketball, volleyball and soccer, while he continued playing baseball.  As if Joe wasn’t getting in enough running with those sports, he was also a member of the track team.  In 6th grade Joe was inducted into the National Junior Honor Society, which required him to maintain his grades and to participate in several community service projects throughout the school year.  Joe knew his academics were as important as sports so found a way to do it all and do it all well.

Joe joined the Orlando Scorpions baseball organization the spring of his 8th grade year.  This brought him to the attention of college baseball coaches.  In December of his freshman year, Joe verbally committed to play baseball at the University of Central Florida (UCF), a decision that at the time was uncommon for someone so young.  But Joe knew that’s where he wanted to go and three years later — when he signed his Letter of Intent to UCF — he couldn’t stop smiling.

High school brought acclaim and recognition for Joe’s sportsmanship and skill.  Joe was awarded the JV Most Valuable Player for basketball and the Newcomer Award for the swim team in his freshman year at Father Lopez Catholic School in Daytona Beach.  Joe also was the starting 3rd baseman on the varsity baseball team, where he was named to the All-District Team and lead Volusia County in runs scored.

In October of his sophomore year, with his sister Molly away at college and his dad working overseas, Joe transferred to Bishop Moore Catholic High School in Orlando, to make it easier for him to get to and from school and sports activities.  Joe soon made new friends and connected with old friends from middle school.   It didn’t take long for him to feel at home.  Joe began to focus his athletics solely on baseball and would be a varsity starter both sophomore and junior year.  Junior year, Joe was awarded the Offensive Player of the Year and Most Valuable Player awards. News of his baseball accomplishments soon reached beyond Bishop Moore Catholic High School as he was named to the Orlando Sentinel’s 2015 All-Area Top 20 player list.

Joe was diagnosed with hypodiploid acute lymphoblastic leukemia, a rare form of the disease, in December, 2015, the week major-league baseball team scouts had been scheduled to visit the Skinner home to discuss the upcoming draft. Joe returned to school in January, but by March he was no longer able to attend classes due to his depleted immune system.  Joe met with his teachers as needed and emailed his assignments to stay current with his schoolwork all while going in and out of the hospital and clinic for chemotherapy and other treatments.  An “A” student, Joe qualified for the Bright Futures Florida Academic Scholars Award and a UCF Pegasus Scholarship in addition to his baseball scholarship.

The outpouring of support was overwhelming.  During Joe’s hospital stays he had constant visitors, friends, teammates, coaches, teachers, school administrators and even the coaching staff from UCF.  He always had a smile and a positive attitude.  Joe also received cards and letters from fellow students offering encouragement and letting him know what an influence he has been to them.  His teammates began selling #SKINNERSTRONG wristbands to raise money that Joe asked to be given to the Make-A-Wish Foundation.

The disease and treatment kept him off the baseball field during his senior season.  Joe went to practices as much as possible and continued working with his hitting coach and his trainer, but there would be setbacks from the leukemia and chemotherapy.  Joe took two at bats to standing ovations that season and went to every game he was physically able to attend to support friends and teammates who had been supporting him over the last few months.  The team’s opponents also rallied around Joe.  Many of the teams purchased and wore the #SKINNERSTRONG wristbands.  Some brought banners or shirts signed by the team.

Soon calls and stay-strong messages came from people he didn’t know but admired.  Joe, a fan of the Chicago Cubs and the Indianapolis Colts received calls and gifts from Cubs players Kyle Schwarber and Anthony Rizzo and Colts coach Chuck Pagano.  Joe’s story somehow made it to the Indianapolis newspaper and Colts players Matt Overton and Pat McAfee posted tweets of support.

Joe passed away on April 30, 2016, in Dallas, Texas awaiting an experimental treatment.  It was the day after the Senior Class Awards Luncheon, where he was awarded the Religion Award, a tribute to how deeply Joe embraced his faith.  Less than a month later his parents, Scott and Judy, along with his sister Molly would attend the Bishop Moore High School graduation and accept Joe’s diploma.

The Bishop Moore, St. Mary Magdalen, and baseball communities continued to rally around Joe.  A memorial service took place at Bishop Moore the Monday the family returned from Dallas, where several of his closest friends spoke of Joe and what he means to them.  The student body lined up to offer condolences and hugs to his parents and to sign a banner that would be given to them later.  Joe’s classmates from Bishop Moore and St. Mary Magdalen and his teammates from several baseball teams filled the church at his funeral.  Hundreds of cards and letters were sent to the family letting them know how special Joe is and how he has inspired them.  Bishop Moore baseball retired his #24 jersey. The Elite Squad and Orlando Scorpions retired the #38 jersey he wore while representing their organizations.  In addition to flowers from several major league baseball teams, the Chicago Cubs and the Boston Red Sox each dedicated one of their 2016 draft picks to Joe and sent the family a custom Jersey. The Houston Astros sent a bat signed by the whole team.  Joe made an impact on everyone he encountered.

On March 2, 2017 Bishop Moore held the dedication of the newly renovated “Joe Skinner Field” which included a blessing by the Most Reverend John Noonan, Bishop of the Diocese of Orlando.

Joe is one of the great ones. 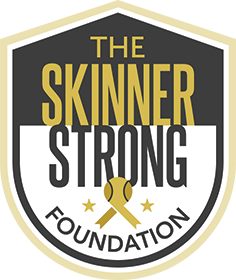